I’ve been meaning to write a blog post about our trip to the Kennedy space center at the end of July but as always life happens at 100 mph and every time I get a chance to sit down I get easily sidetracked and completely forget to go through my camera roll to find the photos from our trip. So yes it’s about two months almost delayed but better now then never right ?

So our trip to the Kennedy space center where tourists and visitors go to explore nasa and learn about all things space was a fun filled day. The awesome thing about living in Florida is how close everything is, this trip was about two hours away from where we live. Leaving the house early isn’t that hard we made it to the parking lot about a hour or two after it opened so it was pretty full but not that horrible of a walk to the front gate. Now I will say this that you will be doing a lot of walking but it’s nothing compared to Disney world for example so keep in mind it’s not an attraction or an amusement park.We didn’t see any rides or anything but towards the end of our trip hubby did explore some sort of space game or ride I can’t say because I didn’t go since I had the little one and a stroller and to be frank I was pooped by then. We did go on the trip with family so having a larger group will slow you down because everyone will want to see everything. Keep that in mind if you do that. If I can do 3 parks at Disney with a 3 year old in one day I could definitely do nasa in half a day no hassle but that’s mostly going through it all faster and not taking the time to read. Yes there is a lot of reading your heard me, but it’s mostly facts with tons of photos and information. Every center/ building we went into there was a short line and then a video or a clip that would explain the history, nasa and so on.

So when entering the Kennedy space center I would say take your photos then and there because you will get easily consumed with everything. It’s super fun for memories and having space shuttles as your background is pretty cool for kids and adults.

Definitely bring a stroller in your coming with little ones. Your allowed to bring in snack for them. I would also advise to bring water with you just because places like this tend to get pricy. Florida is very hot and humid and if you decide to come in the summer time you have to stay hydrated! Especially the little ones. Get that spf going, caps, sunglasses and if you have a portable stroller fan I say grab it as well. I personally won’t recommend to anyone to do this in the summer time but I understand kids have that summer break and that’s usually when families travel. I would only come here again in the spring time honestly and by spring I mean right when winter is about to be over. Your spending some time outdoors and nothing worse then being hot and miserable. 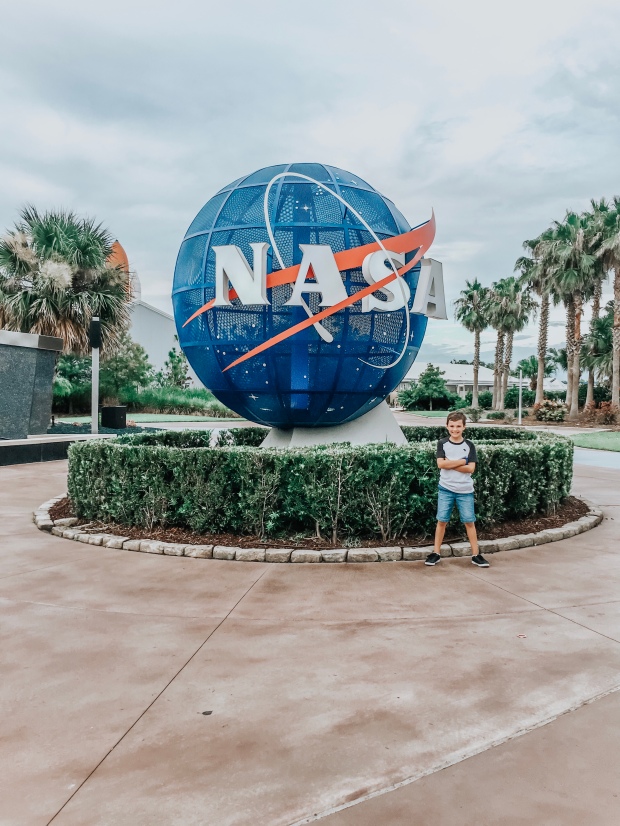 Right as you enter through the gates when getting your tickets and having your bags checked then you will see this giant NASA globe super cool to see it in person and get that selfie! 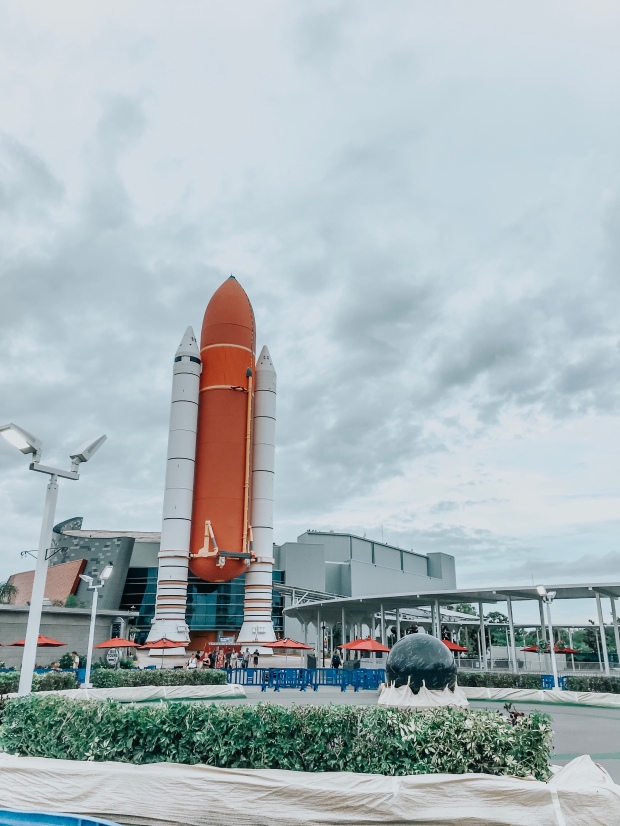 The coolest thing for any kid is this!!! I mean giant space ships that are part of a building is the coolest thing even as an adult to see. There is a map so I would say get one that way you get an idea of the area and you see first the things that interest you. This one for example was the last place we went to. First we walked into a few media buildings if you will, I wish I knew all the names of each place but I don’t so I’m sorry that this is such a bad example. I could be a great tour guide on the spot tho lol.Like I mentioned before your doing a lot of walking. And also you will be doing a lot of watching clips and videos. Some of it is interesting but if you add them all together it’s like a 2 hour history channel film. If your not interested you can skip some of it. You can’t walk out so I would ask first before standing in lines. The one thing I didn’t get to add is that they do a tour bus around nasa and you can actually see where the shuttles take off! That part is super fun. I mean boring because you don’t see anything special in the sense that it’s like 45 minutes of the bus driving through empty land.

Maybe I’m exaggerating it might be 30. Half of the ride you explore the actual area where the space ships take off. They had a launch coming up like a week after our trip and that would of been super fun to witness. The tour bus then takes you to another part of the area which is a giant building that has a lot to see. For example they have a real space ship on display hanging over you as you walk by. Now by real I do want to clarify it’s the spare parts. So when they make a model they make several of them and test them out. But it’s still the real deal! You also get a chance to grab some food and do some nasa shopping. I ended up getting a cute space shuttle pillow for Adriel and he is still obsessed with it. Some things you honestly can’t buy online so if you love it buy it. 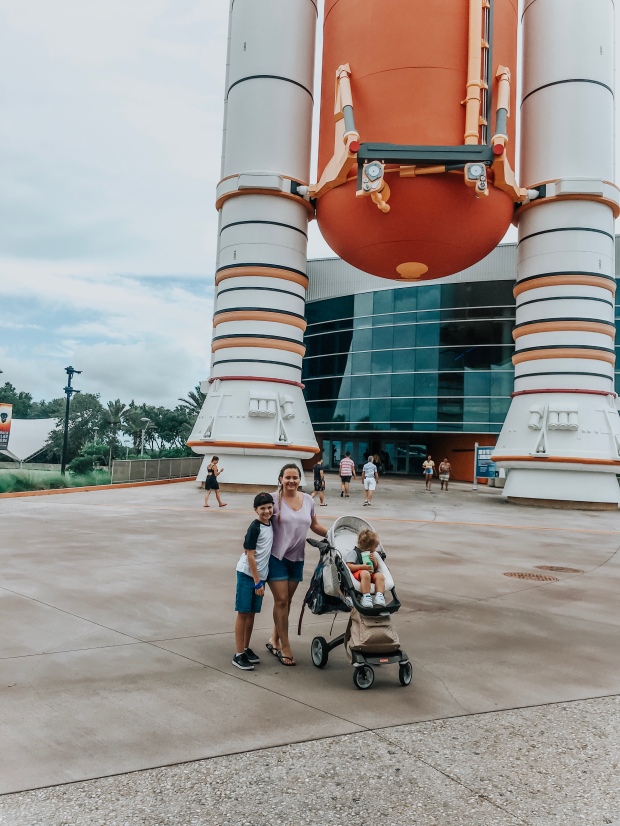 So again I’m so bad with remembering the names of each building we walked into to but this one here where I’m pictured outside with the boys is the best one. It has all the actives that I was personally excited to see. For example they have a real space shuttle like the newest version displayed about high from the ceiling. Then you can’t to literally feel what it’s like to be inside of one as they have it all available for kids to touch and explore.Also there is a cool slide that goes from the top down and that was probably the highlight for my oldest he went at least 20x down. It’s a really big building so there is a lot inside. Including that game or ride I mentioned that my husband went on. It’ might be one of those that you get in and it shakes you so you feel the experience of a astronaut but I’m not sure I could be wrong. 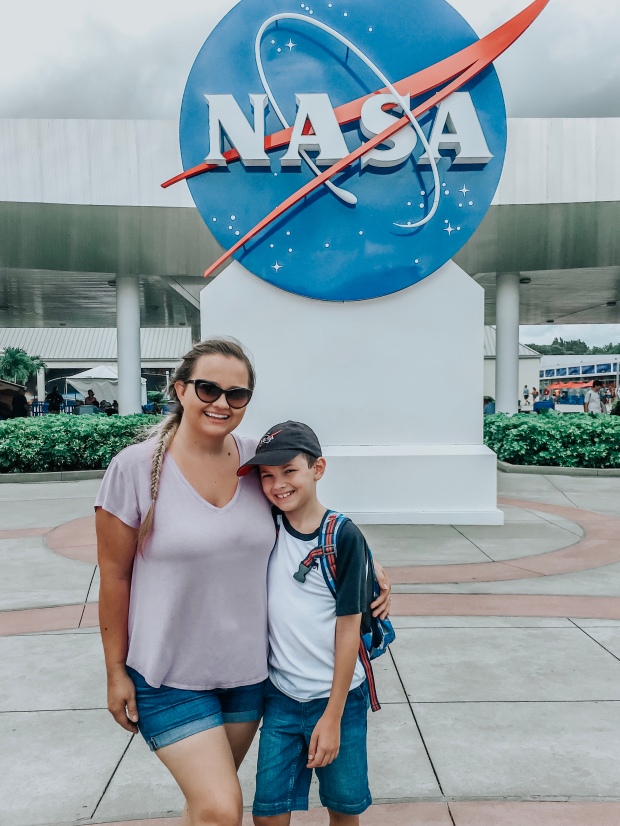 Overall i think it was a great experience. If I went again I would skip a lot and focus more on the activities. For me all the videos was to much I’m normally not a fan of the screen so my eyes felt exhausted. I would say try to do the cool stuff first and then do the tour bus but honestly it’s not something you have to do. Easily can be skipped. There was a cute play area which would of been so fun for liam but we saw it right as the center closed so I was a bit bummed he didn’t get all that energy out.

As far as cost the tickets are not that cheap. I believe it’s between $40-60 per person. It’s late as I’m writing this so I could be way off but I do remember we paid about 170 or so for the 3 of us and Liam was free. We did have lunch during the tour bus ride when it dropped us off at another location so that was about $40-50 I would say it was reasonable. Food was good but don’t expect 5 stars but it was good so I can’t complain. And then on top of that a little shopping and the game or ride my hubby did with Adriel so all together for a family of 4 with a toddler probably cost about close to $300 with gas. We also did stop on the way back home to eat dinner so that isn’t included.

So my final thoughts as always I say you can easily do this on a tight budget and make it fun. You can also spend a lot if that’s just something you feel like doing knowing that this is maybe your one and only time going. I do think it’s a good place to take kids too. I would prepare them that it’s not universal or Disney so they know what to expect.

I would give this place a one more go and this time really narrow it down to the fun bits and avoid the museum part of it. But if I never went again I do think it was a great experience.

If you have questions about anything leave a comment. Also if you don’t follow me on Instagram my handle is everythingjewels and I always post our trips on stories so that’s when you can see things first before a blog post comes out and in this case two months later.. I know I know. But I’m a mom and this summer was just crazy for us.

Hope you found this helpful! Once I get more photos I’ll update the blog and add them! 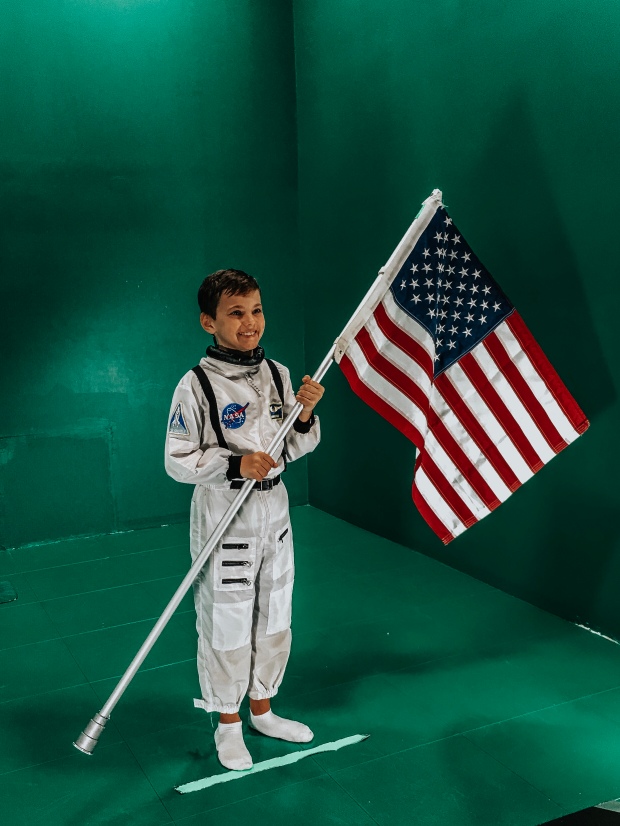 My little astronaut! Adriel loves space so this was a super cool trip for him. And the kid inside me also enjoyed it!